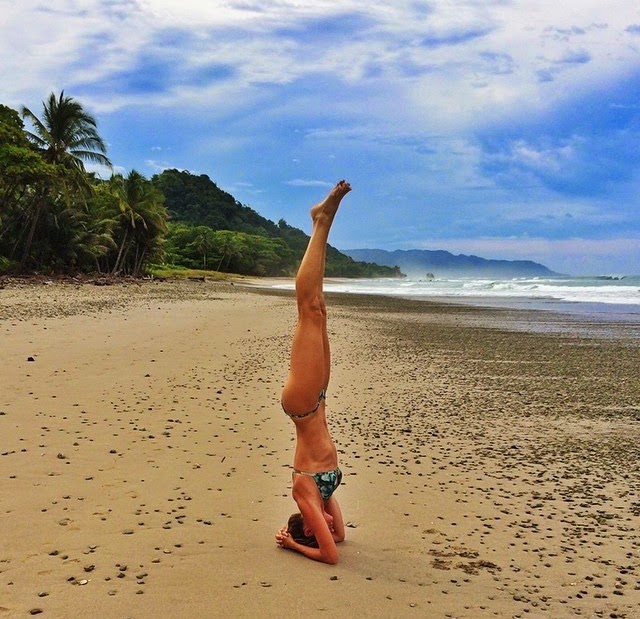 It's lures you in, the photos of supermodels in Brazil on the beach in their yoga poses or even doing yoga in their living rooms with their well behaved perfect babies. This "yogee" lifestyle that comes complete with Giselle Bundchen's body, a dewy glow, and a positive attitude.

Well my battle I will call it, started about 15 years ago when the whole Bikram yoga "thing" was then more of a trend and less of a lifestyle. I went with 2 girlfriends to a studio not knowing what this craze was all about. Heat was rising, shirts were coming off, the room was starting to smell of feet, and being a girl who still unfortunately gets the church giggles, I lost my everliving mind when the man in front of me was showing a solid 6" of his butt crack.   Needless to say we all got kicked out for our inappropriate behavior.  I'll tell you what was inappropriate, that man's sweaty crack. You can see the foreshadowing already.

Fast forward to 3 kids later and hot yoga has become a lifestyle for all walks of life. However, I still had images of head stands on exotic beaches in a bikini, with Giselle Bundchen's body attached to it... and what the heck, her head as well, why not! So I was going to to do this, hot yoga was going to be my way of life moving forward.

This brings me to my Top 5 list of why I'm a failure and why this was both the beginning and the end of Hot Yoga for me.

2. 90 minutes Ohmmmmmg!  - Apparently I missed this part when I looked at the schedule. As the instructor was doing the warm up/meditation where we had to make weird chanting noises that I totally faked because, I'm not making those noises in front of strangers…. I heard her mention that class was 90 minutes. 90 minutes of any type of workout is torture for me because I like to keep it moving and not on a yoga mat. It was quite clear that this wasn't the type of class you could just scoot out early as I would literally need to step over about 100 wet bodies to do so. I don't do well with relaxing with my thoughts. I knew that for 90 minutes I was going to compile tomorrows to-do list. This is my issue, I'm well aware.

3. Nobody Likes a Dutch Oven - Every boyfriend I have ever had would find it hysterical to fart in bed and throw my head under the covers. You can find a similar experience in hot yoga.  There are those that fart loudly which made me laugh and therefore look like a child. Obviously this is par for the course and a regular occurrence and the "Lifestyle members" were giving me side eye so I really had to breathe deep (and the air was thick) and focus on eliminating these giggles. Then there are the ones that cause the Dutch Oven effect. They don't make me laugh. They make me insanely angry. In fact, I look around the room for them as if I can spot them out in the crowd and call them out for their vile lack of self control. They can hold all these poses, yet they cannot hold in a fart. I call bullshit.

4. Adult Slip -N- Slide - This is where the importance of having the proper equipment comes into play. I cannot tell you exactly what we were doing but let's just say that everyone else had their feet firmly planted on their mats and I was sliding all over the place in my own sweat. When we were laying on our mats I was suctioned to my mat and to my sheer horror, I made a fart noise with my body due to all  of all my pooling sweat and because I didn't have that damn "layer". The only option was to recreate the sound right"?  So, I was rolling around like I was having an epileptic seizure trying to make another body fart sound so everyone knew that I didn't actually fart. I was successful, but I think I overdid it.

5. Head Stands & Epidurals - I think I have a pointy head. So, when we got to this part of the class I refrained given the close quarters. I had bad images of the girl humping her mat to recreate a body fart, then taking down half the class in a domino effect with her failed headstand attempt. So I watched. A choice that I still have flashbacks of. I noticed a familiar face and some unfamiliar balls. The Dr that gave me my epidural with my son was wearing a small swimsuit with an unsupportive netting, and voila, my Dr.'s balls and his upside-down face. #scarredforlife.

I think most people leave hot yoga feeling wonderful. I left feeling like someone had just freed me from a dark hole. I don't ever want to go back and I'm fairly certain they don't want me back either. Namaste.