This is dedicated to the love of my life who is the self proclaimed female in this relationship and has endlessly requested that I write this blog entry despite my massive discomfort with putting any serious personal details of my life out there. I hope you are happy as I sit here in a full sweat preparing to write this.  I may very well pass before I hit "publish":) 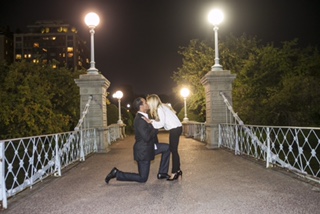 I would love to say I was totally surprised. Christian and I did things a tad backwards to say the very least. We knew that we would eventually get married but "life"  tends to get in the way. Christian is very familiar with Pinterest and a while back asked me to start pinning what I liked for an engagement ring, so I knew that things were not too far off.

Starting on a Saturday while Christian was away in NY for work, I received a small bouquet of flowers with a nice message. I thought this was just simply a nice gesture. Sunday came and I received a larger bouquet with another nice message… this went on for the next 3 days and with each passing day the arrangements were becoming larger and larger.


Wednesday we were heading to dinner for Christians birthday and the flowers arrived right after we left so Christian had our babysitter take a photo of the flowers and the card that went along with them. The card read "because I won't let you go"…. Well, I knew that "I won't let you go" is "our" song by James Morrison, but our babysitter must have literally thought that Christian screwed up big time! House filled with flowers… the card with what seemed to be a crazy message.. great!  So on our ride to Boston I was constructing a text to her explaining, but then realized I now sounded crazy, so I figured I would just explain later.


I Won't Let You go - James Morrison - click on the link

Its Christian's birthday and I'm getting all the flowers, I thought something was up for sure,  BUT… I never expect anything because realistically,  a girls brain would assume one thing, and a guys brain would be thinking about sex or his next meal and therefore he would not actually be planning anything remotely resembling what I have pictured in my head. (Classic  example of men and women being from different planets).

Christian typically has me select the restaurant for special occasions where he's being celebrated but this time he decided to pick.  He chose the "The Bristol" in the Four Seasons, which was probably the best meal I have ever had,  incredible! It had a quintessential Boston vibe but it wasn't at all stuffy or filled with an after work business crowd. Christian and I always say all of "our" restaurants are in NYC but we are coining this our go-to place in Boston. #latetotheparty

First we headed to the bar for a drink. We each had our drinks in hand… but out of nowhere comes a man in black and he hands me a cranberry and soda, (which I didn't order) he said "just a piece of advice, you need to leave this out for at least 3 hours before you drink it",  he also handed me a bouquet of yellow roses, which are my favorite. I immediately started laughing because this is an ongoing joke in our home. I pour myself a cranberry and soda and drink 3 sips and I leave it out all night. I won't go on too much here, but everyday I get a "oh hey, you going to drink this"  while pointing to a big watered down warm glass of cranberry and flat soda. When I die I want one next to my coffin.


Still giggling, we head to our table. By this time I figured something was up, but again, Christian's brain is totally whack so I don't try to pretend like it operates logically, with organized well planned out thoughts building up to a big surprise at the end.  At this time Christian is getting all emotional and deep (haha, you asked for this). We are eating our appetizer and then out of nowhere another MIB (man in black) comes flying over and starts saying in this thick New York accent "you….you are hot!!! No.. you are beautiful…  actually, you are hot and beautiful, but you are hot... here's my number" then he throws down a piece of paper with a phone number on it as well as another bouquet of yellow roses. So.. now I'm looking at Christian, wondering who the hell these people are?! Also, I'm looking over  my shoulder and nervous for anyone dressed in black, scared for what they may do next.  This last bit was another ongoing joke because Christian needed to be schooled on when it's appropriate to use "hot" vs "beautiful".

Dinner came, and so did another bouquet of roses and this time, keeping me on my toes, it was from a girl in a tan trench coat.  She said "hey did you guys lose 2 tickets, because I found 2 tickets for a midnight train to Georgia, last stop Christian town". Well apparently she screwed that one up because Christian wasn't  too thrilled with the delivery. Years ago we discussed our "go to" karaoke songs. Mine was and still is "Midnight train to Georgia".  Christian's vision is that I sing this in a packed bar somewhere.  I told him that when he's on his death bed I will grant him that final wish. This visual in his head is truly one of his life long dreams and probably because I can't sing for shit.  I think he envisions a replication from the  karaoke scene  in the movie "My Best Friends Wedding" where "Kimmy" played by Cameron Diaz committed to her awfulness and the crowd was cheering her on and it was her big "moment". Hopefully I die first.


Christian was starting to get antsy and check the time. He wanted to take a walk in the Boston Public Gardens and despite the fact that I did not have walking shoes on, I obliged. As we headed in the lobby of the Four Seasons I saw a random guy on a bench  with a guitar and then I saw more flowers #crap. The guy asked if we wanted to hear a song… I suppose we had no choice.  The guy starts singing another James Morrison song, "you make it real". Years ago, (the Don Juan days), Christian was trying to sing this to me (I'm laughing out loud as I type) and he was singing all the wrong words. At the time, I was letting it go knowing that I was just going to make fun of him at a later date #iamtheguy #heisthegirl #iamadeadguy.


The guy is playing a guitar in the middle of the hotel, he then stands up and he and Christian proceed to serenade me, loudly.  The guy purposely sang the song with the incorrect words. I turned my whole body into the wall and buried my face into my hands #mortified. People in the lobby are clapping, dancing and yelling. Unlike Christian, I hate when people are staring at me and I hate drawing attention to myself. #iwantotdie.


You Make It Real - James Morrison - click on the link

At this point I am ready for a jog in the park. I grew up in Boston,  I'm 38 years old and I have never been for a walk in in the Boston Public Gardens, #patheticiknow. We were approaching a bench and Christian was talking about how this could be "our bench" in Boston.  We have a special bench in NY outside of Magnolias Bakery in Soho where we eat cupcakes, which is why he brought up this particular bench being "ours".  I guess we could eat baked beans on it….kidding #gross. He put all the flowers down and grabbed my handbag and started getting totally awkward and actually couldn't really speak. I'm not quite sure what he said because it wasn't actual English but I knew he got down on one knee and pulled a box with a ring in out of his jacket.  I saw these paparazzi  flashes of lights and that totally caught me off guard. It took me a minute to realize he hired the photographer. There were people in the park yelling congratulations. The moment was truly surreal.

So… He hired the actors from the comedy improve in Boston. He had given them a mini script and then being that they are improve actors, they ran with it. Now looking back, the people in that restaurant must have thought we were absolutely nuts!

On the ride home Christian played the recording of when he asked my dad for my hand in marriage (yes, he recorded the whole thing with out my dad knowing). It was hysterical because most of the conversation was the two of them trying to cover up my Dad's misstep earlier in the week. He mistakenly asked me why Christian wanted to come over and talk to him #whoops. Their game plan tactics were seriously weak. If this were two women this would have been locked up in 2 seconds flat #justsaying.


Despite the fact that this wasn't a total surprise and we both knew it, it was incredibly special, memorable, unique to us and thoughtful.  Though I wouldn't have ever thought this up in a million years, I wouldn't have   pictured it any other way. I can't wait to be your wife, and I hope this accurately illustrates everything you planned for us that evening.  This was one of many adventures, and the beginning of many more to come.